I know I’ve only run 38 miles in these, but it’s time for a review of the Merrell Bare Access 4. 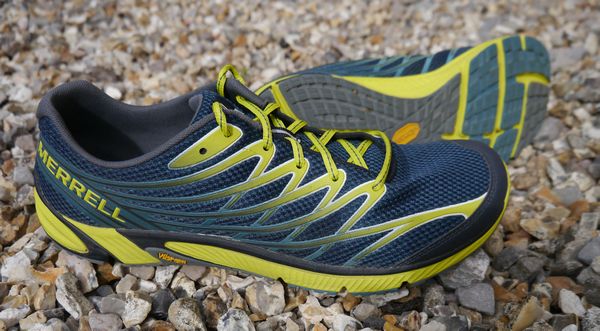 Before buying it, I was looking for a barefoot style, zero-drop shoe, but with just a little cushion for off-road use –  there is lots of big chunk gravel on some of my local trails which I can’t hack at speed in things like Xero or Vivobarefoot (bigger than in the pic above). Other people might want these just for a super responsive ride on roads (when compared to normal trainers). It’s not aimed at muddy trails though.

It’s not the best looking shoe out there, but for a foot shaped shoe, it’s pretty good, veering towards traditional trainer shape than the more slipper-like styles of other brands. The Merrell and Vibram logos stand out and the mix of light and dark colours all over make for an easily recognisable shoe.

The Bare Access 4 is zero-drop between the forefoot and heel. The stack is about 13mm, with 8mm of cushion. There is Vibram rubber (the grey bits) on high wear areas of the sole.

The main mesh of the upper is quite flexible with minimal support and I like the design of the welds for the laces which curve around to the back of the shoe. The rear half has a thin extra layer of padding and thicker bit of padding over the achilles. 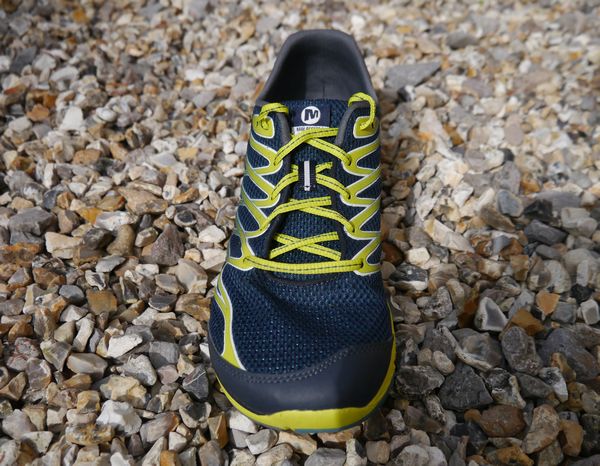 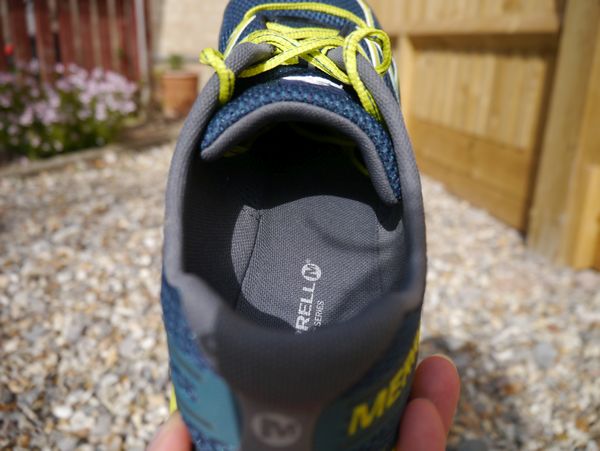 The first area where the Bare Access 4 fails is the insole area. At first glance, all looks normal inside, but as soon as you put them on and start walking or running, you’ll notice that there is a significant shape and structure to the cushion under the arch, which doesn’t make any sense for a shoe aimed at people interested in barefoot style shoes. It’s very intrusive at first and I could feel it digging in to the arch with every step. Not enough to cause rubbing, but enough to provide some “arch support” which is totally the opposite of what I was expecting. Even more odd is the same shape curves up on the outside edge opposite the arch where you’d expect it to be totally flat. I don’t know how this design was arrived it, but it needs addressing in any future version. I looked around at comments online which suggested that others were noticing this too but that it squashed down a bit after a few miles. This was correct – after about 15 miles, the arch felt a little less intrusive, but still enough to bother me and the outside upwards curve never felt any better in all the miles I used them.

Note that I’m aware other Merrells like the “Glove” shoes also have a shape to the arch, but there’s no structure to match, so those shoes don’t intrude while running.

The second area where it falls down is the firm, splash-proof toe-guard around the front. Once I’d got up to runs of 5 miles or more, I got some blisters on the inner sides of both of my big toes. The toe guard drops down in exactly the wrong place, so the toes rub constantly on the boundary between the mesh and the toe-guard. I’m very surprised that no one else has reported on this elsewhere – in theory it could just be me, but I so rarely get blisters, even on a 50 mile run along the South Downs Way (lots of hills), that to get them so soon in the dry, I can only assume the design of the Bare Access 4 is at fault here.

Finally, what’s with the “toe spring”? With the midfoot flat on the floor, the front of the toes are curved up by 2 inches off the deck on my size. Given that the forefoot is very flexible, there’s just no need for this sort of curve at the front.

An area that I do like is the feel under the forefoot. It’s quite flexible, both in twist and toe curl, with exactly the level of cushion I was looking for. Big stones could just about be ploughed through without worrying too much as long as cadence was fast enough and footfall was soft enough. If I had been able to ignore the shapes in the middle of the foot, it would have been a pleasure to run in. Personally, I’m a forefoot / midfoot runner, but I tried landing on the heel first, and the rear of the sole is quite firm, so it encourages a quick footfall and lift.

As you’ve probably guessed by now, I can’t recommend the Merrell Bare Access 4 due to the shaped structures in the midfoot and the rubbing toe-guard, but if these were addressed in a future version, I’d be keen to try it again.