The adidas adizero adios boost is similar to the adios 2, but there are some fundamental differences that go further than just the boost material used in the sole. adidas is making the adios boost available alongside the classic adios 2, both of which are lightweight race shoes aimed primarily at longer distances and marathons, but can also be enjoyed for much shorter distances and during training. They are part of adidas’ top end adizero range. 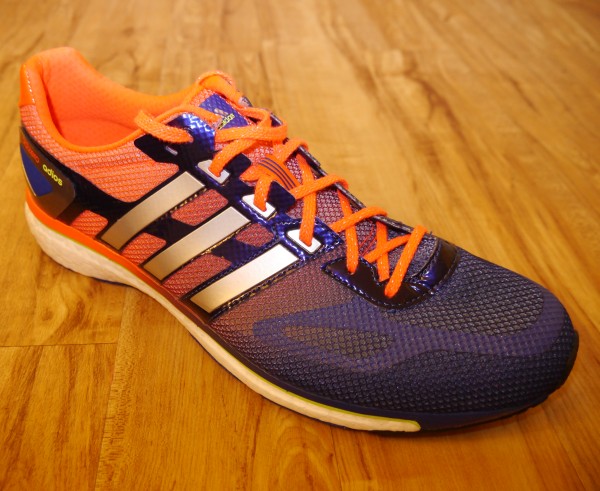 Both the first and second place runners in the Tokyo Marathon 2013 were wearing adios boost shoes, and the Chicago Marathon record was broken in 2013 by Dennis Kimetto in adios boost, so the new shoe has already proved itself to be able to perform at the highest level. 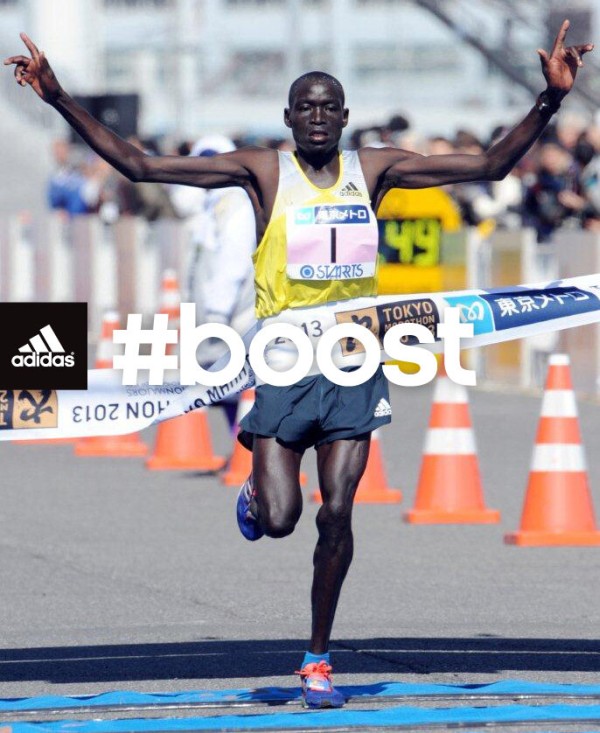 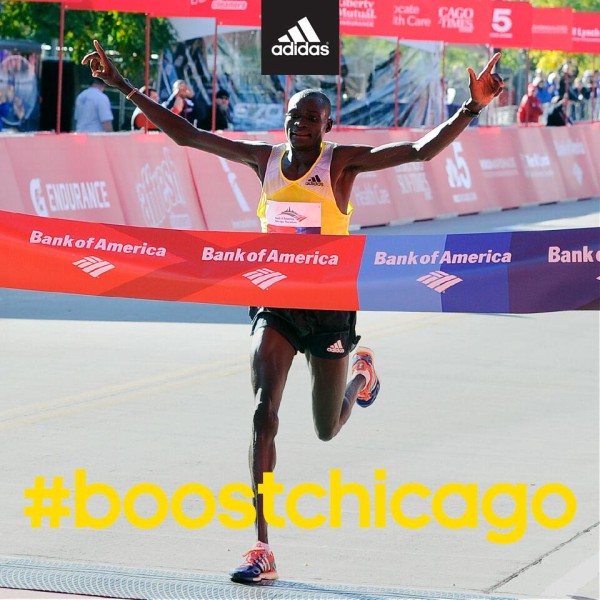 The adios 2 is a beautiful shoe with a classic upper meeting a technical sole area. In contrast, the adios boost is a futuristic kaleidescope of colours mixed with silver stripes and a liquid grey heel counter, all mounted on the distinctive boost sole. The upper starts off dark blue at the front and flows with gradient fill to a bright orange at the back. Change is good and I love it, although I’m sure it will divide opinion. It could only be improved by a slightly less explosive lace than the day-glo orange with silver threads fitted as standard. 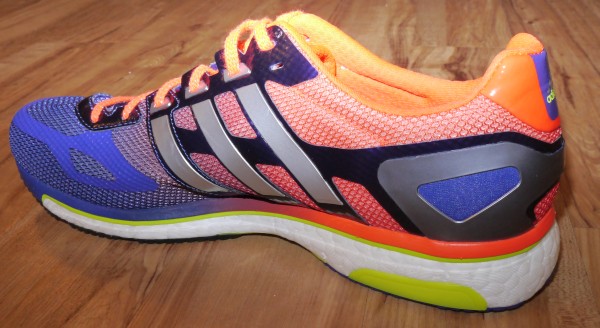 It’s important to note that size may be smaller than the adios 2 (if you are already familiar with that shoe). My 2012 adios 2 is a size 12, but in the adios boost, the 11.5 is absolutely identical inside for toe-to-shoe-end gap, making it half a size smaller. For reference, I take a size 12 Energy boost too. If you buy direct from adidas, they have a good returns policy. 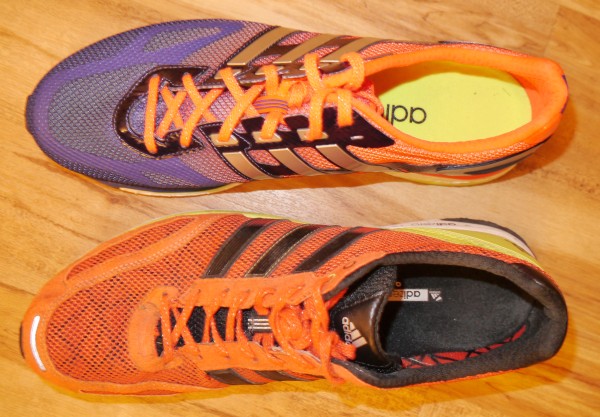 You may have seen the video that adidas released of a metal ball being bounced on a sheet of the boost material. However, I wondered if you would still be able to notice the effect when using something MUCH heavier – such as a leg! So I donned an adios 2 on one foot and an adios boost on the other and sat on a firm chair. Then with legs outstretched and straight, I relaxed them, allowing them to drop with gravity until my feet hit the floor. The result was immediately clear. The foot shod with the adios 2 with its traditional EVA (adidas’ version at the back of the adios 2 is called adiprene) absorbed most of the energy, with a small bounce and very quickly coming coming to rest. The foot wearing the adios boost bounced back up a couple of inches. The result surprised me – my expectation was fully that there would be no perceivable difference between the two shoes. adidas 1 – me 0. 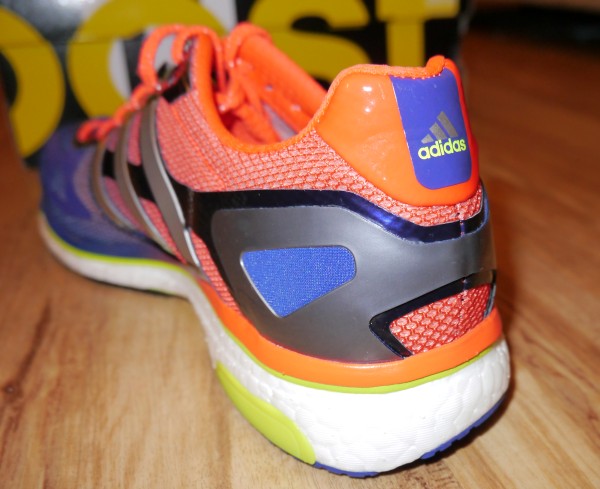 My size 11.5 adios boost are 252g each on my scales which is significantly lighter than the adios 2 which are 272g each for the size 12 that fits me.

Whilst at first glance the adios boost is similar to its sibling adios 2 (or should that be parent?), there have been some major changes in the construction. Gone are the leather reinforcements at the front of the upper, replaced by the Techfit design that places thinner reinforcement within the mesh. Inside the upper, seams are almost eliminated by welding super thin panels over them which might appeal to triathletes. 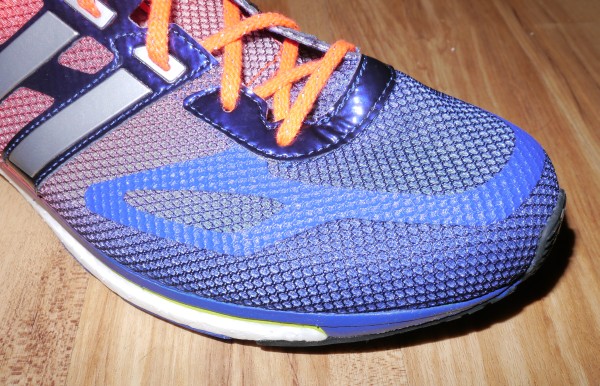 The toe area is slightly wider, allowing the toes to spread more when planted – personally I prefer this, allowing my foot to land more naturally. The toe does not curl upwards much though in stark contrast to the adios 2 which curls up sharply which I noticed at walking speed, but once running felt no different. 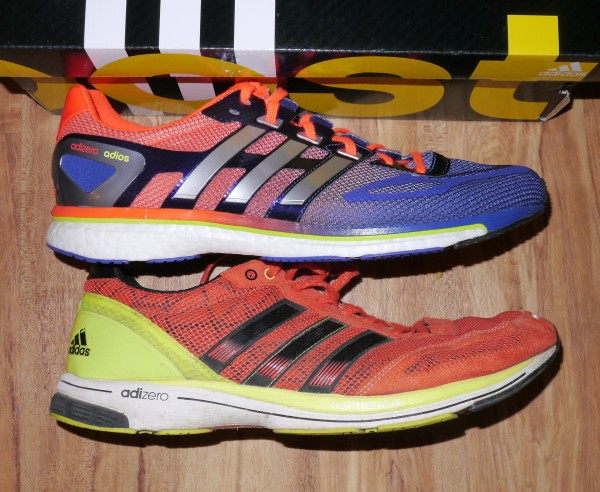 Next is the new heel counter that is shared across the rest of the current boost range – it is more compliant laterally than the adios 2 counter but does the same job just as effectively and contributes to the weight loss. 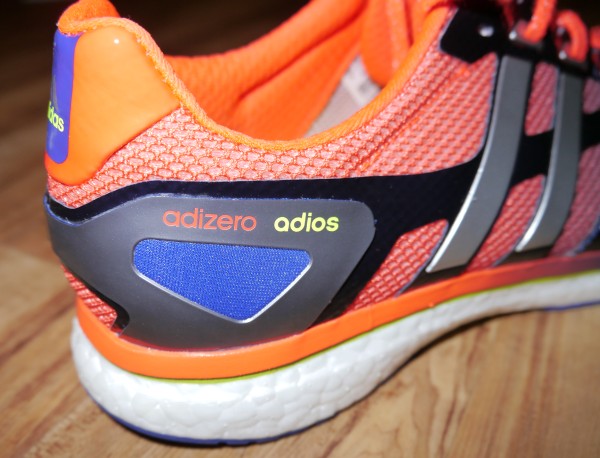 The outer sole is very similar to that of the adios 2, but has slightly narrower channels of rubber “bobbles” in the forefoot area. The rest of the Continental rubber is identical and the torsion system is almost the same apart from on the inside of the heel where it goes vertical up the side to provide some extra stability, preventing roll-in (over-pronation). 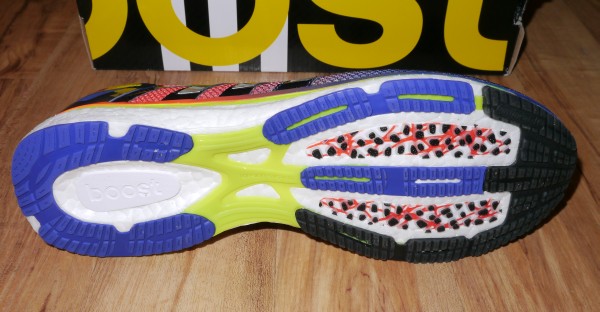 Finally there is slightly less padding at the heel end giving an overall heel-to-toe drop of 10mm: a 1mm reduction when compared to the adios 2.

At the time of writing, I’ve run 70+km in the adios boost on a mixture of surfaces including tarmac, shingle beach, dirt trail, gravel paths and rocky trails. I have included a mix of training from short 1km max speed intervals and up to a half marathon (at a little below race pace). I’ll add updates if have further thoughts with additional miles.

First impressions out of the box and on to the feet were excellent. The lack of any internal structure to rub on was reassuring, so I didn’t bother gently running the adios boost in, instead opting for a couple of fast workouts on day 1, the second including intervals. Rather than doing too much analysis early on, I just tried to get on with my normal workout. However, I did notice the effects of the larger toe-box, with more toe spread and also the boost sole which was super smooth. Landing on the heel has the foot gliding through the transition to the forefoot without the notchy interruption you get half way through the adios 2 strike. The heel does sink in, but is pushed from the sides of the boost foam to stay in line. Landing on the forefoot with a light following heeltouch is very springy with the heeltouch coming back up naturally and is the running style surely going to benefit the most from the boost effect, with the foot being underneath or even behind the body already by the time the heel touches down.

Of course my curiorisity got the better of me, so I decided to directly compare the adios boost to the adios 2 by trying one on each foot. Shutting my eyes briefly and going off foot feel alone, I was able to discern the difference between the two soles. The boost sole is softer, so the foot sinks into it further than the adiprene and adiprene+ which should reduce injury by reducing the max force experienced by the leg at any point in time. But the boost heel is more spritely when pushing off for the next stride too.

The wide toe plant and soft boost sole give an increased feel of what is going on under the forefoot on the ground in comparison to the firmer adiprene+ of the adios 2. This is advantageous in almost all situations apart from sharp rocks or small pebbles resting on hard trails which are supressed better by the adios 2. Therefore if doing a rocky off-road course, I’d probably choose the adios 2, but for all other runs including smoother off-road, I’d choose the boost. It’s worth noting that my adios 2 have already done 400+ miles, so are showing signs of EVA compression, which adidas claim will be much reduced in the same timespan with the boost sole. I have yet to do a full marathon in them, but I wonder if there will be a trade off with the softer front end (vs adiprene+) and more spacious toe-box perhaps not supporting the toe position as much towards the end of the race for those of us that can’t yet finish the race in two hours.

However, at the half marathon distance including 7km of off-road forest trail running towards the end (with roots and rough ground), the wider toe-plant and increased feel of the trail surface made for a lively, rewarding run. My feet were blister-free and blissfully comfortable at the end. The combination of light weight, comfort and potential for injury reduction make this a winner for the average race runner. I’ve found my new favourite running shoes.

I recommend you buy adios boost direct from adidas

Some of the forefoot grip has worn as expected, but it still grips plenty well enough and the boost sole is indestructible and as far as I can tell is “as new”.