Sometimes you do a race and think “That was the best race ever”. 21st July 2013 was the first mountain bike Gravity Enduro event held at Head Down near Queen Elizabeth Country Park (QECP). The QECP Trail Collective had been digging for months to prepare for the race and all their hard work paid off in spades, so to speak.

Arriving at the venue, there was a hugely vibrant buzz about the place, with people on and off bikes everywhere, congregating near the race village where a fantastic array of relevant brands had rocked up to pimp their wares and provide cake. This meant you could happily just start chatting to anyone near you and get a conversation going about the race, the weather (HOT!), tyre choices and the latest and greatest bike gear. Everyone was super friendly and all up for having fun.

Four timed (mostly) downhill stages wound down the hillside, with a more gradual transition ascent before the next stage. Each rider was assigned a start time for each timed stage, with the stopwatch starting whether you were there or not, be it due to technical issue (punctures etc.) or just laziness on the transition. Riders started at 30 second intervals so with the stages being between 4 and 7 minutes, overtaking slower riders safely or moving over for faster riders was all part of the fun.

The genius at this event was that all stages started at the same place at the top of the hill in the woods and ended at the same place at the bottom of the hill in a clearing, with all four sets of trail tape funnelling in towards the timing marshals like a marble run toy. With 150 riders spread across a few hours, bikes often flew across the line right next to each other having just finished different stages. This meant that there were always large numbers of riders grouped in the same places, waiting to start or recovering from their run, so banter levels were high with everyone chatting through their run or giving advice on what previously nailed trails had in store. Or pointing out that my back wheel quick release wasn’t actually done up – oops. Additionally it meant the transition was always the same, giving the chance to decide how fast to go back up (do you peg it back up and recover at the top, or take it easy and recover on the way up?)

Unlike previous gravity enduros I’ve raced in, this one allowed us to practice in the morning of the race, with advice on which stages to try if time was tight or just muscles weren’t up to the job of doing all the courses and uphills twice in the day. I had tried stage one before, so I tried the final stage which was just as well, with part of it being high speed, super loose off-camber which caught many people out in the race, but practice allowed me to remember to keep tight and hit the brakes just prior to the loose stuff. It also included the crazy switchbacks at the finish line which needed respect.

After a short race briefing, the riders got going from half way round the transition, near the race village, as a warm up. When it came to my turn, I dropped down into the only downhill section of the transition and having not done it in practice, hammered it until I saw someone standing seemingly on the track with a camera – this was all the warning I needed, so I smashed the brakes on and peeled into the left hand corner just in time. Thank you camera guy for ensuring I actually made it to the start of the stage one! The rest of the transition was a very gently uphill on a firetrail, with plenty of time in the Sport category to get your breath back at the top for a few minutes. The pro cat riders had 5 mins less on transition, so they must have found it pretty tough with only a bit spare. It was really hot on the day, but luckily most of the course was covered by trees, so it wasn’t a problem.

Stage 1 was very popular, with some fast flowing sections, numerous lips and drops, and some confusing tight corners when blasting in at speed. Big smiles all round.

Stage 2 was the first to start tiring riders out with some long flowing trails through the woods, with lots of pedalling to keep the pace on. I caught my helmet on a branch coming out of the corner before the finish, so crossed the line wrestling the bike underneath me and seeing stars. A big bruise on my thigh was all I had to show for it luckily.

Stage 3 had a steep start, but some energy sapping climbs before a shallower downhill mash to the finish, with some very tight switchbacks, one of which I overshot and disappeared off down the hill. Running the bike back up to the track was pretty hilarious, but I was kicking myself for the mistake.

Stage 4 was brilliant, with a deceptive rooty section which begged to be ridden flat out, but actually needed some speed scrubbed off before immediately joining the loose scree on the off camber section that sent lots of riders spinning round. I managed to keep a tight line ready to pedal back up the hill again, but I was spent. Now it was just a case of staying upright and paying attention to the signs saying “not far to cake!” and “pedal, it’s a race!” which really helped focus. The final off camber switchbacks were packed with crash vultures, shouting encouragement to go faster, even though that’s the last thing that was needed, with some slow controlled slides being the order of the day to stay upright. Any attempt to put the front brakes on here was futile, with some riders being sent over the bars. A top end to the racing! 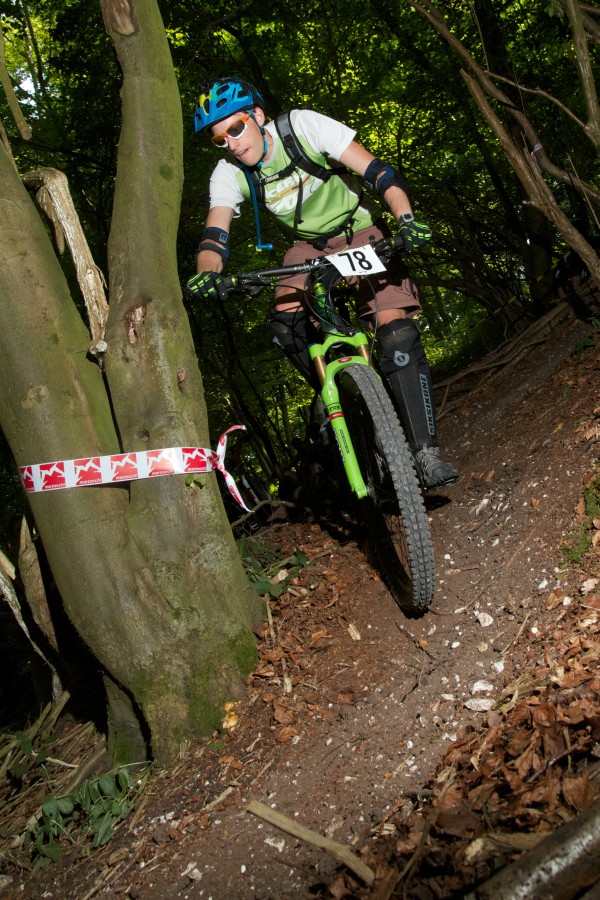 I was surpised to learn that my miserable efforts had got me into 25th in Sport, so whilst not too shabby, I know I could do far better if I was fitter since most of the time was lost on the pedalling sections. Next year I’ll be ready! Additionally the full DH Bontrager G4 tyre I had on the front of my Trek Remedy 9, whilst inspiring massive confidence in the technical sections, was really too heavy. It was a worthwhile experiment.

In another genius move, PureMountains holidays had provided a biking holiday to be given away at the prize giving via random race number draw, but only to people that were there to receive it, so the prize giving was rammed! At least 100 of the 150 riders were packed into the clearing to cheer and congratulate the winners. Everyone I spoke to said the race day was amazing and one of if not the best race they had entered. All the more astonishing given that this was the first race the QECP Trail Collective had run, organised by Scott Fitz.