Gearselected were invited to the launch of adidas’ new mid-sole technology called “boost”, touted as the future replacement for EVA. Their first shoe to use this, called the Energy Boost, has been provided to journalists to try out in advance of the 27th February 2013 retail release date and already the Interwebs are awash with copy-pastes from marketing material and subjective commentary on how it “feels” while running. However, Gearselected aims to bring you something a little bit different with a more objective approach that sidesteps the marketing and gets down to the facts. Therefore, as well as going for a 10k run in them (I’ll do a long term test report later), I also really wanted to know how they compare to the established technologies, and I’m guessing so do you! So I tested them by wearing the Energy Boost on one foot and other trainers on the other foot. The results were immediately obvious, but first let’s preview the shoe.

The Energy Boost is just the first shoe to be equipped with boost, and as such is intended to be an all round shoe, with a neutral base, aimed at the urban road runner with a minimal style that will appeal to everyone, but especially those in the up-to-35 group. It is squarely aimed at road use. Shoes focused more on stability or race use are the Adistar Boost and the Adios Boost, which will fit alongside the Adizero Adios 2 rather than replace it. I have reviewed the Adios Boost here.

The first thing you see (as proved by my son when he first commented on them) is that the mid-sole looks like it is made from polystyrene. However, the first touch shows this is something completely different. It is a TPU elastic plastic that is claimed to return to its original shape for at least the first 500km / 300miles. It is also claimed that it keeps its elastic properties all the way down to -20degC and up to +40degC, something with EVA cannot manage. 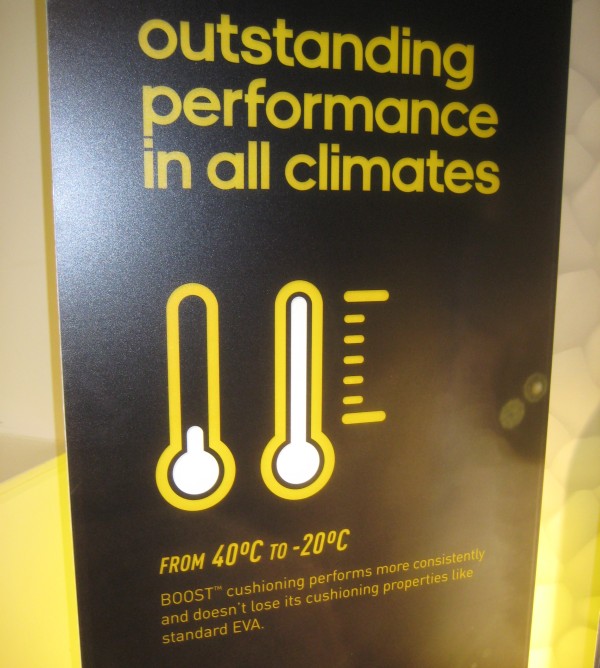 Rather than a solid piece like EVA, Boost is made from lots of little egg shaped balls (referred to as “energy storing capsules”) which, after being joined together, form a bouncy honeycomb-style mesh. Comparisons of big steel balls being dropped on to EVA and on to Boost show that EVA compresses less and damps quicker, whereas Boost compresses more but also returns the energy via bounce. Therefore deceleration during foot-strike should be less severe being over a longer distance, providing a softer landing, especially critical for heel strikers. adidas have the patent on this for the next 5 years with the option to extend. 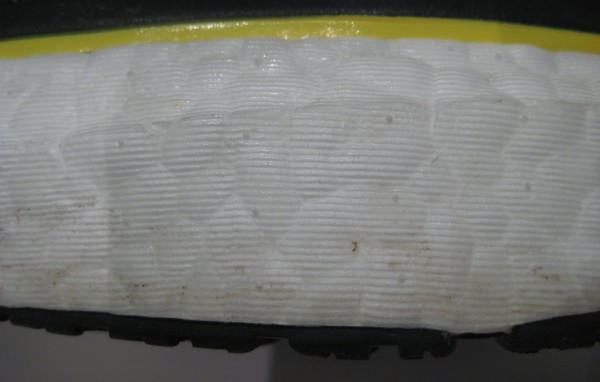 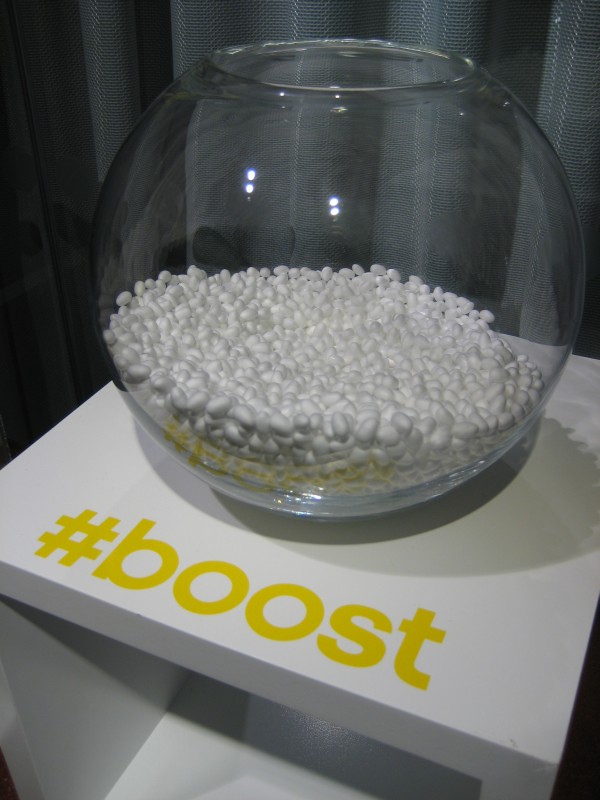 The upper is fairly minimal, being seamless in the PU reinforced forefoot and proved very comfortable on a sockless 3 mile run and I expect that to continue for longer distances. There was a slight initial niggle in the instep just where the super-flexible forefoot material joins the stiffer sidewalls, but this disappeared after a few minutes and after 45 minutes on the road, I almost forgot to check for signs of rubbing. I’m happy to report that a cursory check reveal happy comfortable feet with no rubbing anywhere. 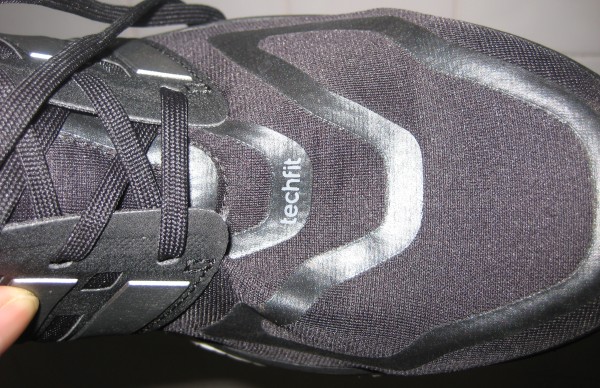 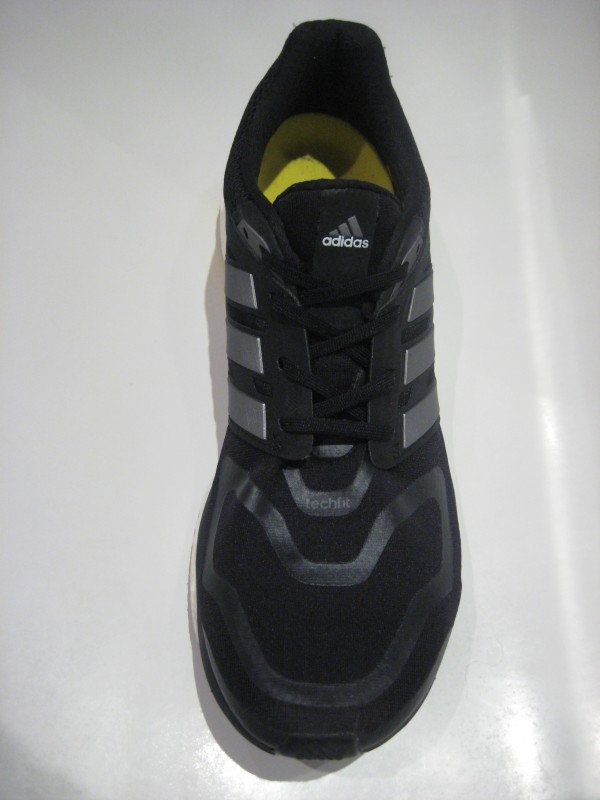 Under the standard in-sole, with minimal instep support, adidas have used an almost non-existent last, essentially a thin strip, welded to the comfy mid-sole. The upper has been stitched to this thin strip and the edges have been reinforced on the outside by a thin EVA weld. This allows the ride height to be pretty much against the mid-sole, bringing your feet nearer the floor for the given amount of cushioning and there is even a circle cut from the last to show you the honeycomb underneath. 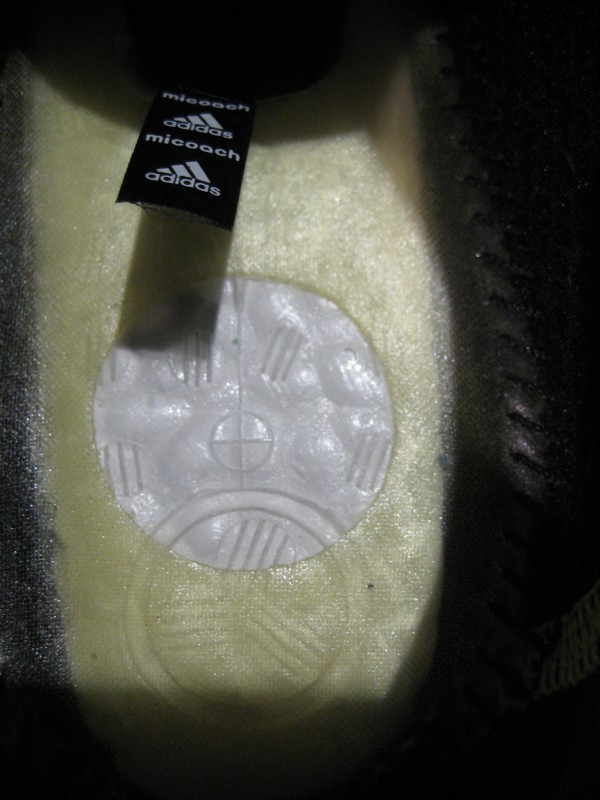 The Energy Boost heel drop of 10mm is slightly smaller than tradition dictates, starting on 22mm at the back and 12mm at the front, but is not anywhere near the new wave of 0-6mm drop shoes which is to be expected given its target market. 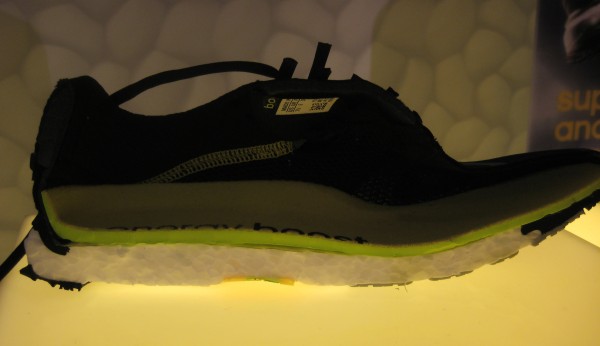 A relatively soft heel counter keeps the shoe in place. A torsion bar in between the sole and the mid-sole provides a bit of anti-roll and extends around the outside edge of the heel for a bit of extra medial resistance. A small lip of heel rubber encourages a quick transition from heel to toe. 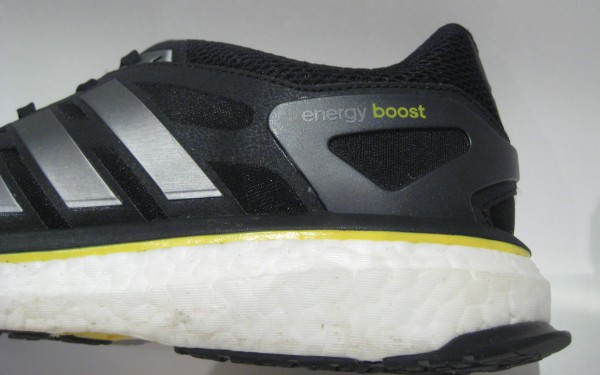 There is a pronounced toe box curl and the whole area from the ball of the foot forwards is very willing to flex.

A note on size: the size 12 I’m wearing fits perfectly which means that they come out quite small and snug, just like the adios 2 in which I also wear a 12, whereas in most other trainers I’m either an 11 or 11.5.

adidas have proudly left the honeycomb look of the mid-sole on display in white and then switched to a solid single colour for most of the upper apart from the signature 3-stripes. When considered with the the PU bonding strips around the forefoot, it looks very modern and striking. Other colours are in the pipeline.

Stealth reflective patches on the heel and tongue are finished in the same colour as the upper.

The “energy boost” logo is unobtrusively applied to the heel counter, but when you look inside, the bright yellow in-sole has the same logo in a huge font for maximum impact when off your feet! 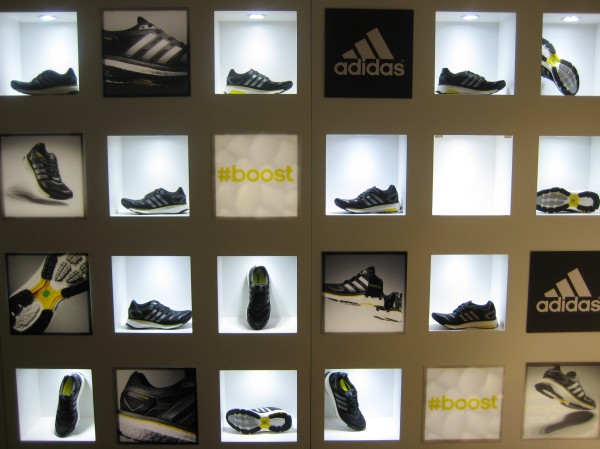 On the road: boost Vs EVA vs Adiprene+

The first test on the road was a run with the Energy Boost on one foot Vs the Adiprene+ equipped Adios 2 on the other. When landing barefoot style on the balls of my feet in the Adios 2, they immediately felt like they were thudding down against the Adiprene+ in stark comparison to the soft, gentle impact of the boost. The amount of difference surprised me. Pushing off actually felt quite similar and I don’t think I can call it either way on which was returning energy the most. In theory the 75% energy return (how high can something bounce on it) of the boost should be different from the 67% of the Adiprene+, but on the day, I couldn’t tell.

Next up was a run with the boost on one foot Vs EVA on the other foot provided by the Mizuno Wave Precision. Landing on the heels, it was immediately noticeable that the boost was more soft and comfortable and I would fully expect a scientific test to demonstrate a lower peak impact force for the boost, spreading the impact over time. Benefits here for heel strikers and avoiding injury could be interesting. Oddly I have seen reports on other sites stating they believe the boost feels firmer to land on than normal EVA which I cannot understand. It’s firm enough to be in full control, certainly, but not more firm in my opinion. Moving on to the forefoot landing style and the differences were less pronounced – the 10mm reduced cushioning made it tougher to determine, both of them feeling good. This was surprising because based on the experience at the heel end, I was fully expecting the front end to have a similarly distinct feel. However, the last thing I did was put the other Energy Boost on and immediately the forefoot landing felt softer compared to the EVA and it was just my original Energy Boost equipped foot getting accustomed to the ride. Starting over a bit later with the Energy Boost Vs the EVA, the boost was noticeably softer on forefoot landing, but far less pronounced than with heel-strike.

Finally I went for a 10k run in the Energy Boost and fell back on more subjective notions. I used a mixture of normal heel-strike and forefoot styles. On heel-strike the first thing that I noticed was the luxury cushioned landing, swiftly followed by a very smooth transition. This made for a very confident ride. Additionally the boost material is more easily twisted and flexed in comparison to EVA which gave me more feel of what was going on under my toes than expected on the short bit of off-road I tried. On forefoot strike I noticed it was a softer landing than the Adios that I’m used to, but I can’t really say any more than that at the moment. A much longer term test will be needed, so I’ll do another report after 50+ miles.

Something else I like to check with new shoes is the grip level. I tested this in the dry and wet by twisting on the spot and by sprinting on the toes and put the Energy Boost with Adiwear compound rubber on one foot up against the Continental rubber of an adios 2 on the other foot. The adios 2 had the edge in the sprint but the Energy Boost was marginally more planted on the ball of the foot – looking at the tread, this is possibly due to actual amount of contact patch in each area. 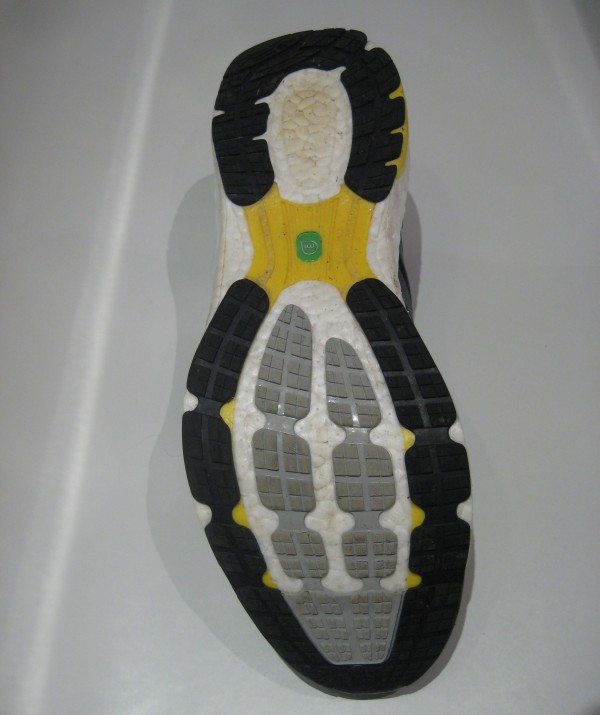 It was an enjoyable run and I had a smile the whole way, but obviously it’s impossible to say if the benefits of the energy return were actually received. My guess is that the faster the runner, the more the bounce effect will be beneficial, with strong push-off phase being rewarded with the boost. For joggers with pronounced heel-strike, the benefits will come more in the form of theoretical superior cushioning. It cushions as well as bouncing back to the same original shape for 300+ miles (which sounds like some sort of holy grail). What I can say for sure is that adidas’ boost technology makes for a shoe that feels noticeably different and it feels good. This alone will ensure that it has many converts on release at the end of February.

I’ll continue to provide updates on my thoughts in further reports as the miles rack up.

edit: After about 100 miles in these shoes, unless I’m running off-road, I normally reach for these shoes when getting ready for a run. They are so comfy to run in whilst still supporting well, and going back to EVA soled shoes feels really odd. I’m convinced that the Boost sole is a long-term winner.

You can buy them direct from www.adidas.com

Many thanks to adidas for taking the time to show me the new tech and shoe as well as answer all my questions. If any of you have further questions, let me know and I’ll see if I can get them answered.

16 thoughts on “On the road: adidas Energy Boost Review Vs EVA Vs Adiprene+”