Gearselected was invited to view the exciting new adidas 2013 range at their Covent Garden HQ in London, so I charged up the extra camera battery and headed over there to check out the sports performance gear.

The friendly and knowledgeable people at adidas made me very welcome, taking me through all the relevant products. There was a focus on running, showing off a potted history of adidas shoe technology advancements, followed by a display of all the key 2013 running shoes and running apparel. Continuing on the theme of technology improvements, there was a teaser for a new sole compound called BOOST that adidas will introduce some time in the first half of 2013. There was also the new adidas cycling range which you can read about here.

The main focus of the press event was on running, with the lounge area dominated by a display of various adidas running shoe technologies, from Jesse Owen’s 1936 running spike, through the 1984 “Micropacer” – a forerunner to today’s MiCoach – which tracked time and counted steps, all the way to Jessica Ennis’ Adizero Prime Sp spike shoe. I especially liked the 1985 “aps”, which featured a simple key arrangement to change the compression of the cushioning in the heel :)

Yeah, they were all yellow

Look at the stars, Look how they shine for you…. The “yellow” line in Coldplay’s lyric is meaningless, but yellow now has a proper meaning – adidas’ 2013 Adizero range of top end running products has a strong yellow theme running through it, so it will be easy to spot if you are wearing the latest gear. adidas break their main running range into three groups – Response being the entry level, Supernova being the Intermidate, with the Adizero being the ultimate optimised gear, packing as much technology as possible into just the right amount of material for sporty people with aspirations and goals to achieve. This article concentrates on the Adizero range. 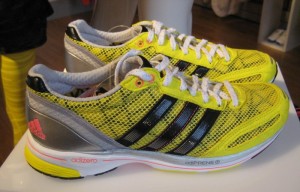 The current women’s Adios 2 could easily be mistaken for a men’s shoe, (unless you pay for a “mi” custom build!), but the colour scheme on the 2012 model takes the yellow theme and compliments it with a silver heel and subtle pink highlights in the logo, sole sides, one of the adidas stripes, top lace eyes and the torsion system undereath. This combination makes it a great looking women’s shoe.

It’s a light weight distance shoe with a little more cushioning than normal race shoes and has a medium to normal heel drop. 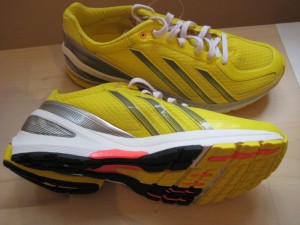 The F50 Runner is taking over from the F50 2 to easily differentiate from the F50 football shoe. It’s similar in design with the split heel, but the 3 stripe design on the upper is different.

The silver and yellow theme continues, but with less pink here, and will appeal to a lot of runners.

The F50 Runner is all about light weight breathability without sacrificing cusioning. 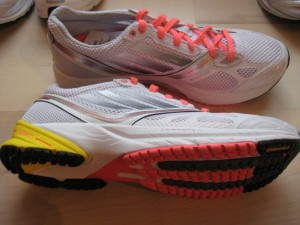 The 2013 model’s colour scheme is far better than last year’s mauve and deep blues, instead opting for a predominantly white upper, a flash of yellow in the heel, with pink laces and sole details.

As ever, the Tempo 5 provides light weight with stability and the shaped heel section keeps the weight down whilstl still providing a soft heel strike. 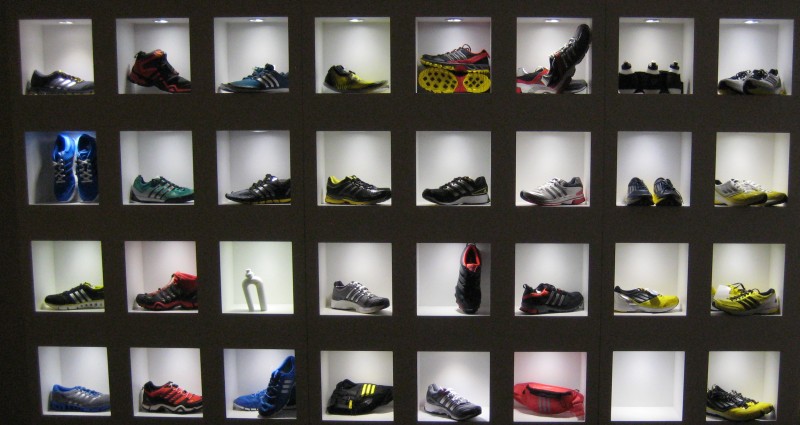 The colour change for the 2013 Boston 3 takes on a more understated persona, with a white upper, silver heels and yellow detailing and with looks like this, it could almost sit in the Originals range!

The Boston 3 aims to provide a marathon distance shoe for people who still want top end performance but want more cushioning than the Adios 2.

The current model has a very striking colour scheme that masks the transition from upper to sole, but the 2013 model loses a bit of impact. This is due to the 2013 model only using two main colours instead of the three enjoyed by the current model, so it comes across as visually a little weaker. Performance will remain unchanged unless yellow does actually make you go faster! Let’s hope there’s an alternative 3 colour choice at some point.

The Tempo 5 is a light weight cushioned stability shoe. 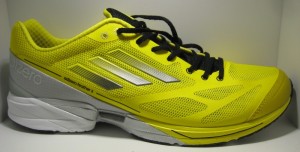 The 2013 colours excel through the use of silver with white at the rear and notably the extension of the stunning yellow at the front all the way down into the base of the sole (like the 2012 black model), making it really stand out. It looks fast!

Our favourite shoe of 2012 returns thankfully unchanged in 2013, with new colours in a yellow upper and heel splash, and a white heel support. Both the old bright orange and the new bright yellow work for me, so no doubt, I’ll be selecting a pair of these soon.

Interestingly the forefoot flex felt firmer than mine does currently and under the assumption that the shoe construction remains unchanged, it shows that the Adios 2 does soften up a bit at the front – I’m on 150+ miles now.

It’s a light weight grippy marathon shoe, but also excels at shorter distances for those with the pace to match.

Having struggled in some trail shoes with only medium knobbles during a super slippery cross-country race earlier in the year, these are high on my new shoe shortlist.

The light weight mesh should make drying after wet-puddle conditions easy and the serious knobble profile will make light work of mud and loose loamy dirt, with enough gap to shed properly and avoid clogging.

The black on the upper is a little bold against the yellow, but overall it works.

The miCoach enabled Ace 4 provides a bit of extra cushioning under the forefoot than most of the Adizero models and includes the torsion system for stability.

It blends all four colours of white, yellow, black and silver, pretty successfully too. The sole looks like a skeletal structure which is appealing.

New for 2013, the Aegis 3, updates on its predecessor with the addition of the grippier Continental rubber on the sole and Sprint Web for friction free running. The split density mid-sole provides shock absorption on the lateral side and propulsion on the medial side for stability.

It’s the only Adizero mens shoe to have the dark blue on the upper, making it stand out from the rest of the range. 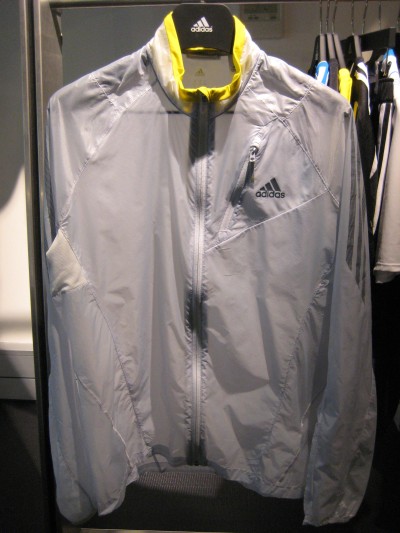 Another favourite of ours returns in 2013. The ClimaProof jacket puts wind and water resistance where it’s most needed, using more breathable fabrics in various areas such as under the arms and the top middle of the back. It’s incredibly light weight too.

The current model was yellow already, so unlike the rest of the 2013 range, this jacket has actually moved away from yellow towards a translucent white, popular in motorcross and cycling. It retains a yellow collar detail. Whilst I love the colour scheme it has lost the safety advantages of the current model’s yellow overload! I expect this will go down a storm though. 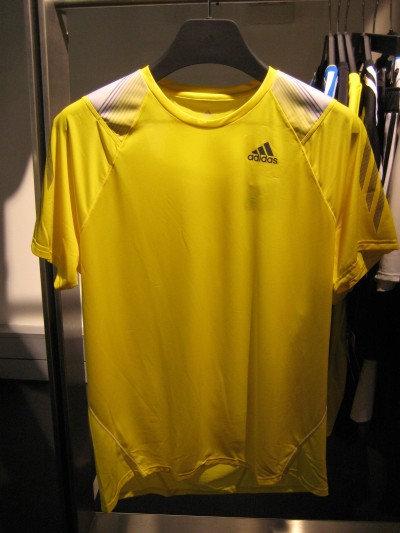 To go with the rest of your new yellow gear, you’ll need to select this short sleeve t-shirt for when conditions aren’t quite warm enough for a singlet. 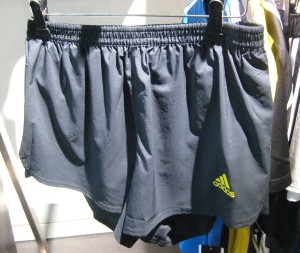 The shorts are dark grey with a yellow adidas logo. Not a lot else I can say about these! 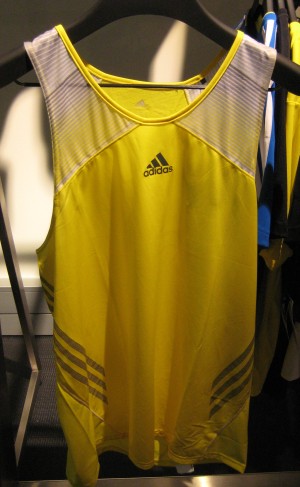 The singlet looks the business, with 3 stripes either side of the hips and a fade-to-white effect on the shoulders, carefully offset by a yellow neckline. All good!

The 2013 adidas Adizero range is looking great in yellow.

Many thanks to adidas for their time and personal attention.